OECD and Broadband Networks of the Future

On “Earth Day” 50 years ago they proposed their ‘green economic growth strategy’, which is overseen by the Environment Policy Committee, and entails

“Green growth is about fostering economic growth and development while ensuring that the natural assets continue to provide the resources and environmental services on which our well-being relies.To do this it must catalyse investment and innovation which will underpin sustained growth and give rise to new economic opportunities.” Towards Green Growth: Monitoring Progress, 2011

On the July 20th this year the Organisation for Economic Co-operation and Development (OECD) published a new report on digital economy titled “Broadband networks of the future”. In essence the reports reveals that the last 50 have shown little attention and dedication of the OECD to the mounting scientific evidence of the climate emergency. The OECD remains a strong believer in their original concept of a ‘green economic growth strategy’. This is evidenced by the following points raised in the report.

First, the emphasise on economic recovery and growth as the most important task after the SARS-Cov-19 pandemic. It’s achievement depends most critically on a deepening and broadening of rolling out new Internet network technologies, most notably glass Fibers-To-The-House (FTTH). As OECD data shows in the figure below, glass fibre overtook coax cable in 2021 to become the biggest wired broadband technology, while DSL was left behind in 2020. It is interesting to notice that this development towards optical information technology takes place not only on the network layer but also within the circutry on chips which is driven by an immense growth of financial input and research output of the quantum computing community. 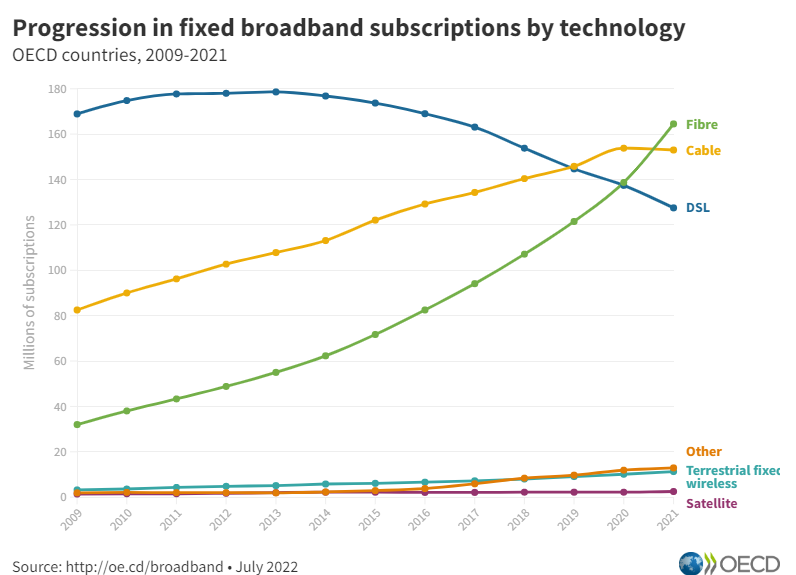 In parallel the network virtualisation, Internet of Things (IoT) and Artificial Intelligence (AI) is said to be crucial for increased networks resilience and redundancy.

The weaknesses of the described “future-proof broadband “ are numerous. First, although the OECD promotes circular economy models on regional up to international scale, there is no word in the report how the exchange of the existing infrastructure can be done circular: how will the existing physical infrastructure (coax cables, gateways, firewalls, load balancing devices, etc.) be recycled? where are the materials for the new cables and devices coming from?

Second, such recommendations neglect climate and digital justice issues that are introduced through the above named technologies, as outlined in the “Environmental justice, climate justice, and the space of digital rights” report written by the Open Environmental Data Project, Ford Foundation, Ariadne, and Mozilla.