In this research project, I am examining the impact of digital platforms for political participation (DPPPs, [1]) on urban democracy, through the case study of Omastadi in Helsinki, together with Yu-Shan Tsen, Pablo Aragón and others.

The aims are to identifying different topologies of citizen-users who have (or not) taken part in e-participatory budgeting process. Each topology points to a specific type of citizen-user who share similar behaviour and emotional characteristics

The behaviour of a user can be characterised by the ways in which users conduct online participatory activities, including (but not limited to) filtering, browsing, mobilising, voting, commenting, proposing etc. Emotional characteristic is seen as any distinctive psychological traits of citizen-users. To identify the topologies we make use of quantitative methods (to identify behaviours), and qualitative methods (to identify emotional states). Previously studied user-topologies are for example: ‘power users’ who frequently log-in on to a DPPP and cast significant amount of votes/proposals regardless the outcome [2]; ‘networked user’ who strategically mobilises their social network from social media or elsewhere to support their proposals [3]; ‘one-timer’ who access a DPPP only once or twice due to their frustration and confusion throughout the participatory process [3]; ‘outcast’ whose viewpoint and/or access to online participation is excluded from a DPPP due to ethical and cultural backgrounds [4].

The project especially focuses on developing and prioritising an urban perspective and inquiry to the effect of Omastadi platform on urban democracy and everyday life of immigrants. The urban perspective here is to highlight the immigrants whose everyday life struggles and aspirations for a better city are less visible and less validated against the simple majoritarian rule of the Omastadi platform. In other words, this urban perspective reproblematises the platformisation of participatory budgeting like Omastadi by emphasising the contrast between the highly visible, repetitive and normative urban projects (which eventually got funding from Omastadi) versus the relatively unpolished and unheard urban struggles and aspirations. 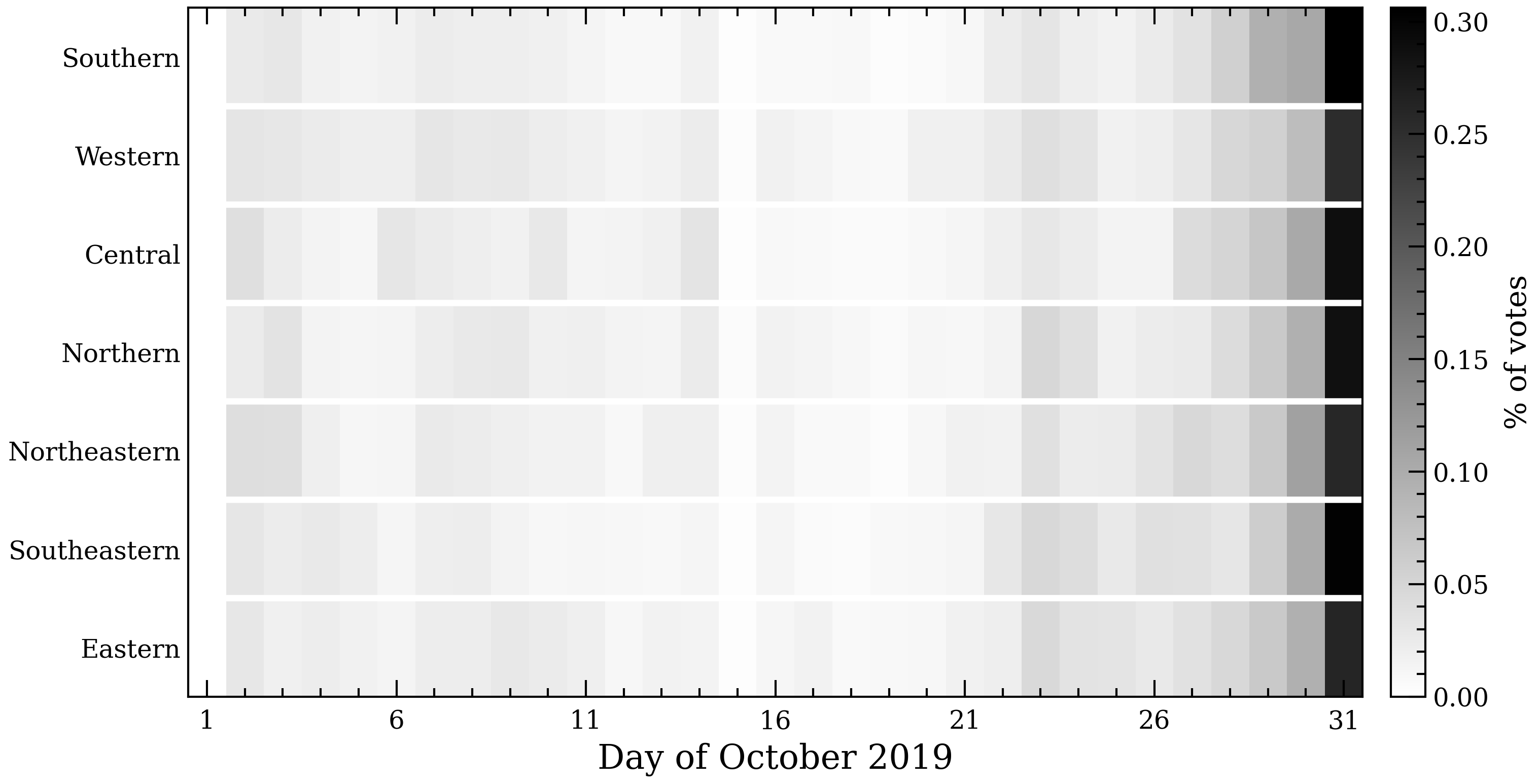 The figure visualizes what percentages of votes for a given day were collected compared to the overall number of votes that were collected per district of Helsinki. From it we can identify, e.g., two behaviours: early-bird and last-minute users.

[4] Hague, B. N. and Loader, B. D. (1999) Digital democracy: Discourse and decision making in the information age. Chapter: Digital Democracy: An Introduction. Routledge